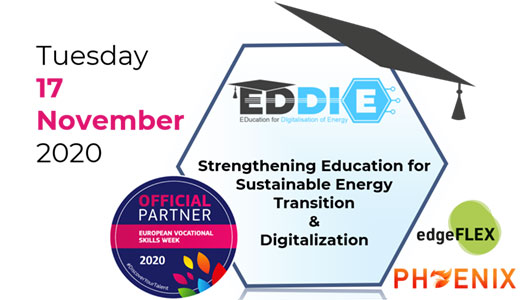 CRE (Centrul Roman al Energiei) and the Partners of the European Consortium which implements the EDDIE Project – EDucation for DIgitalization of Energy, organized on Tuesday, 17th November 2020, the First International Online Conference, dedicated to Strengthening Education for Sustainable Energy Transition and Digitalization.

The event addressed topics like the role of education in the new age of digitalization and the development of synergies with innovation projects funded by the European Commission (EC) through the Horizon2020 program – EDGEFLEX and PHOENIX, projects in which CRE is also a partner, contribute to decisions in the process of digitization of the European energy sector. More than 120 representatives of academic and industry environment at European level, together with representatives of the European and National Institutions, responded positively to the invitation of CRE and EDDIE to take part in this event.

During the session, the attendees could participate on three panel discussions, including questions and conclusions on identifying industry challenges and personnel qualification and training needs for Cybersecurity in the energy sector. “The Education is the responsibility not only of their providers, but also of their demanders”, said Miguel Angel SANCHEZ FORNIE, EDDIE Consortium Coordinator, urging a constructive collaboration between academic environment & industry.

Moreover, a specific panel addressed the synergies between two of the most relevant European innovation projects in the field of the energy digitization, which are PHOENIX and edgeFLEX:

The contribution of the PHOENIX Project in the digitization of the energy sector is accomplished by improving the cyber security of European Energy Systems (EPES).

Dr. Theodore Zahariadis from Synelixis and Mr. Emiliano Marquesini from CRE presented the PHOENIX project and highlighted the related Culture of Security and Knowledge activities of the project.

In his final remarks, the Vice President of CRE, Mihai PĂUN, summarized the whole conversation, by stating that “The CRE is continuously exploring synergies among the telecommunications, energy and transport sectors in terms of Information and Communication Technology (ICT), digitalization and infrastructure”. “We encourage a close collaboration between these sectors in order to use the available resources in an efficient way and with visible results.”

The CRE Association is an active and strategic partner together with its members and other potential members in international consortia for deploying energy projects funded by the EC, such as: SUCCESS, RESERVE, WISEGRID, NRG5, CROSSBOW, SOGNO, PHOENIX, TRINITY, EDDIE and EDGEFLEX.

The webinar enabled to get a better understanding of the landmarks for the mandatory digitization of the energy assets and the importance of providing flexibility and protection to the energy infrastructures as a key part of the transformation process.