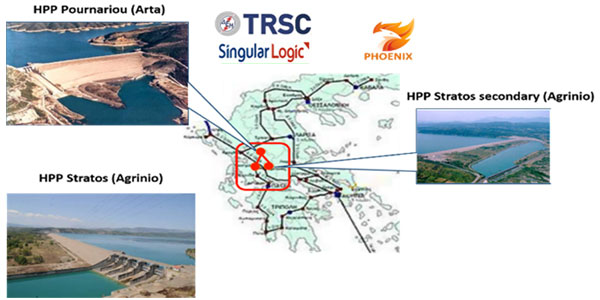 The Phoenix LSP2 is currently being organised by PPC S.A. Greece. Hydroelectric Power Plants (HPP’s) participating in LSP2 communicate via optical fibres. We review briefly the possibility of eavesdropping on optical fibres, a process known as fibre tapping. Moreover we report on some recent advances on MCDA algorithms which are a key ingredient in Phoenix.

Let’s remind ourselves that in mobile networks information (data) is transmitted using radio frequencies (RF) whereas in optical fibres information (data) is transmitted using visible light (VL), both RF and VL are electromagnetic waves although of different frequencies: in mobile networks the following frequencies are used –all generations (400-5000 MHz) whereas visible light frequency spectrum  is 400-800 THz. In principle, FT is possible although it is more difficult to perform than eavesdropping on RF communications (see for example [1] for a brief exposition and especially  [2] for a detailed exposition).

How could one eavesdrop on optical fibres then?

Well, first one has to peal-off the plastic cover of the optical fibre to expose the glass.

Second, simply bend the optical fibre to extract the light out of it and then apply a photodiode and turn light into electric current.

Apply optical splitting. This method causes some disruption on the line, as the optical cable is split using a clip that cuts into the cable and attaches a second fibre cable, which transmits light from the main fibre to a device controlled by the attacker.

What are the possible countermeasures against FT?

The first method is to apply a fibre optic sensor and monitor attenuation along the fibre.

Attenuation in fibre optics, also known as transmission loss, is the reduction in intensity of the light beam (or signal) with respect to the distance travelled through a transmission medium. Attenuation coefficients in fiber optics usually use units of dB/km through the medium due to the relatively high quality of transparency of modern optical transmission media. The medium is typically a fiber of silica glass that confines the incident light beam to the inside. Attenuation is an important factor limiting the transmission of a digital signal across large distances. Thus, much research has gone into both limiting the attenuation and maximizing the amplification of the optical signal. Empirical research has shown that attenuation in optical fibers is caused primarily by both scattering and absorption

Attenuation (denoted A, measured in dB) in fiber optics can be quantified using the following equation (W denotes Watts):

The second method is to apply optical interferometry techniques to monitor the speckle pattern of the system: A modally dispersive coherent light traveling through the multi-mode fibre mixes at the fibre’s terminus, thus resulting in a characteristic pattern of light and dark splotches called “speckle pattern”. The laser speckle is stable as long as the fibre remains immobile, but flickers when the fibre is vibrated. A fibre-optic sensor works by measuring the time dependence of this speckle pattern and applying digital signal processing to the fast Fourier transform (FFT) of the temporal data.

Modern classical cryptography-mathematically speaking- is mainly based on factoring out large integers into a product of primes, this is a “hard problem” in complexity theory. There are various algorithms achieving this. On the other hand, quantum cryptography is based on Bell’s inequalities (Bell’s theorem, CERN, 1964) in quantum mechanics which imply “No Quantum Xeroxing”. The later implies that no eavesdropping is possible in the public key distribution process without being noticed.

The key ingredient of Phoenix is MYRIAD, a tool suite developed by Thales for MCDA (Multi Criteria Decision Aiding) in Artificial Intelligence (AI).  Myriad in turn is based on  a two-additive Choquet Integral (see for example [1], [3], [4], [5]  & [6]). Motivated by the current coronavirus  pandemic and recognising the potential of MCDA, Dr Ioannis P. ZOIS suggested the idea to apply MCDA to speed up the trials for the covid 19 vaccine developed by his alma matter Oxford University and AstraZeneca Pharmaceuticals.  During 18-22 May 2020 the Bill and Melinda Gates Foundation organised a virtual conference with the general title «Artificial Intelligence in Drug and Vaccine Design and Testing». The conference was under the aegis of FDA (Food and Drug Administration, USA) and it was supported by CERN Computing (which helped with simulations), NASA, ESA, the Oak Ridge and Los Alamos National Labs in the US etc. The participants included some of the  top medical schools in the world (Oxford, Harvard, Cambridge etc ), some of the top pharmaceutical firms in the world (like Pfizer US, Glaxo UK, Sanofi France, Beyer Germany, Roche & Novartis Switzerland etc) along with defence industry (Locheed Martin, Dassault, British Aerospace, Boeing), computer companies (IBM, Microsoft, Intel) etc. Dr I. P. Zois  gave a talk entitled «Quantized calculus in MCDA and Deep Machine Learning» and he was also a member of the conference organising committee. The chairs of the conference were 3 world class scientists:

Dr Zois developed and presented an outline of an advanced version of MCDA based on state-of-the art pure mathematics like Quantized Calculus. QC  was developed fairly recently by two of the world most eminent mathematicians,  Alain Connes from IHES and College de France and Daniel Quillen from Oxford University, both Fields Medalists (both of whom have collaborated with Dr Zois in the past, see [2]).